My AC is Leaking Freon. Do I Need a New System in Meridian, ID? 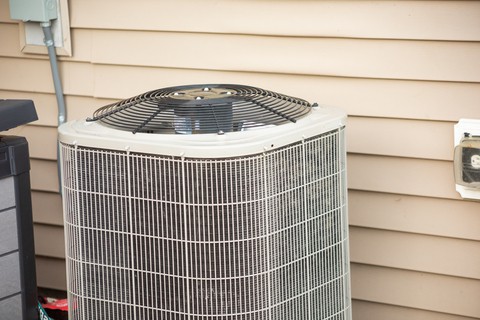 If your air conditioner is more than ten years old, a freon leak likely means you will need a new system. Those older units use R22, and that coolant is scarce today. However, at Snowflake Air, we take a few extra steps so that we can help you save money on a repair or replacement whenever we can.

Usually, a coolant leak in your central air system is a straightforward repair: We find the leak, we fix it, and we recharge the system.

Without getting too far into the mechanics of it all, the coolant, or refrigerant, in your central air conditioner runs in a closed loop. It’s always heating up and cooling down. It never gets used up.

So, if everything is working the way it should, you’ll never need a recharge or a top-off, or anything like that.

But, when the coolant your system uses is in short supply, the situation is much different.

In this article, we’ll go over why you can’t get coolant for older systems any more. And, how to know if you’ll need to replace your AC because of a leak. We’ll also tell you about how we here at Snowflake Air go the extra mile to keep your system working as long as possible.

Signs of a Refrigerant Leak

Spotting a refrigerant leak is a topic that deserves its own article. But, if you’re reading this, you’re probably already looking out for one. So, here’s a quick rundown:

The system is running, but the air through the vents is warm. That’s because the condenser is circulating air just fine, but nothing’s cooling it down. Now, this could be a separate problem, but it’s usually people’s first clue of a leak.

If there’s a soft hissing sound near the outdoor unit, you may be hearing the coolant escaping the system. You have to listen closely for it, but it’s a telltale sign.

Freon has a sweet scent, but also reminds people of formaldehyde or other chemicals. If you pick up on that odor and you’re noticing other signs, you’ve likely pinpointed the problem.

The current lack of R22, or freon, technically started decades ago, but kicked into high gear in 2010.

When researchers discovered a hole in the Earth’s ozone layer in 1985, the Environmental Protection Agency in the United States, along with international counterparts, began phasing out the use and manufacturing of various chemicals that contributed to the problem. 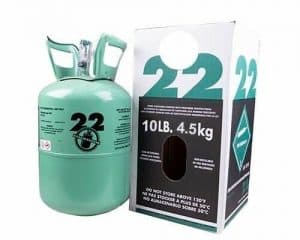 A decade ago, R22 was next in line. To make the phaseout easier, it came in stages: First, no new ACs used freon. Most use R410A coolant today. Then, R22 production gradually decreased. Starting in 2020, no new R22 is produced.

As a side note, R22 was not the first coolant used in ACs. But, it was the industry standard for a while.

Now, with no new production, the supply is dwindling and the price is going up. That means the recharge on that older unit may be impossible if there’s none in your area. Or, the price will have risen so much that it’s no longer cost-effective.

On the one hand, it’s frustrating to hear that a “small” repair can end up with you having to replace the whole condenser. On the other, however, remember that this only affects systems that are more than 10 years old.

Your average air conditioning unit lasts between 10 and 20 years. The ones that make it to a second decade are the ones that get proper care and yearly maintenance. Otherwise, the average is 15 years.

So, if yours is past the 10-year mark, there’s a good chance you were due for a replacement soon, anyway. At that point, we’d take the age of your unit into consideration when making a recommendation for any problem. 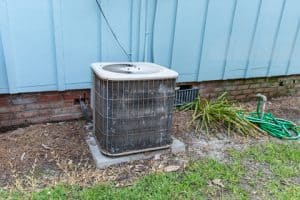 We hear a good question from some customers: If we can’t use R22, how about the new stuff, R410A? Unfortunately, it’s not that simple.

Yes, it’s technically possible to retrofit an old air conditioner that used freon to run on R410A instead. But, it’s an expensive process on a unit that likely doesn’t have that much more life in it anyway.

Sometimes, it’s cost-effective for industrial units. They’re much more costly to replace and a lot of times they’ve been maintained more regularly. But for residential, you’re throwing your money away.

When Can You Repair an R22 Leak?

If there’s a very small leak, and we catch it early, there’s a chance we can patch it and use a small amount of available freon to get you up and running again. In some cases, recycled R22 can keep the system running for the rest of the season.

But that’s a really tough call, and you’d need to still have most of the refrigerant still intact.

With that being said, here’s what Snowflake does differently.

Leak Sealer for ACs That Use R22 Freon

At Snowflake we use the Max Seal direct inject products. It’s a quick fix: You attach the pump to the AC, and it seals up the leak in seconds. But, it also sends a dye through your system. 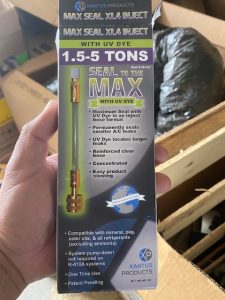 That way, if there’s a big leak, we can find it. And, our customers can see it, too. That way, they know we’re telling them the truth. Meanwhile, you can only see the dye under UV light. So, there’s no mess.

The problems we run into on recharges is that the leaks can be hard to find. And, time is of the essence. In that case, you’re losing coolant as we’re locating the problem. Or, there’s more than one leak. We patch and recharge, but the problem comes right back.

Again, this isn’t as big a deal with newer ACs because R410A is readily available. But, it’s more of a gamble with freon.

If all you need is that small patch, then with any luck, you are good to go! But, if the problem is bigger than that, we can give you more information and show you exactly what’s going on.

We know people are skeptical of HVAC contractors just coming in and trying to sell them a big-ticket item. This way, we can get your home cool and comfortable again without you feeling pressured to make a purchase.