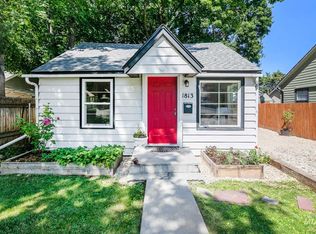 We received a call from a Boise, ID homeowner who, until recently, was wrestling with a problem: He had a small, older house that wasn’t set up for central air. He wanted to add cooling but didn’t want a loud, energy-guzzling window air conditioner. He also didn’t want to add ductwork to his home.

For a long time, that meant he did without cooling. And, back when they built it in 1949, that wasn’t a big deal. Temperatures were all-around cooler back then, and people were okay with fans and open windows.

Today, however, circulating the air alone won’t keep people cool and comfortable. Air conditioning is more of a necessity than ever before.

But, what was the best way to keep this home cool?

Our homeowner had heard about mini splits and ductless heating and cooling. So, he called Snowflake Air looking for more information.

We’re big proponents of these systems, and we told him all about how they work and how they’d fit in his home. After a little more research, our homeowner called us back to schedule an installation.

And, if you’d like to learn more about how ductless heating and cooling could work in your Boise, ID home, call or email us for a free consultation.

Problem: An older Boise, ID home needed air conditioning. Since there was no forced-air heat, the homeowners couldn’t add central air. That would mean adding ductwork to a smaller home.
Solution: Installed a one-zone Mitsubishi ductless heating and cooling mini split. With a small cottage, a single indoor air handler would do the job. And it wouldn’t take up any valuable living space.

How Ductless Takes Up Less Room

Ductless heating and cooling offers a lot of advantages: superior comfort, low energy bills, and lots of customization. But, the biggest draw for this Boise, ID homeowner was how little room it would take up. 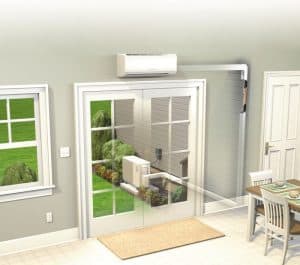 He wouldn’t need a big, loud AC condenser outside next to his house. Nor would he have to take up room in each room to build soffits around new ductwork.

Instead, all he sees inside is a single air handler hanging on the wall. Outside, the heat pump is smaller — and much, much quieter — than a conventional condenser.

These systems are often called “mini splits” because they’re small and “split” between the indoor and outdoor parts.

You can read more about the exact dimensions of these parts in the article below. But, the long and short of it is that there’s virtually no footprint.

The trick to it is that the system only transfers heat back and forth. That’s opposed to drawing in air through a return vent, passing it through the system to cool it, and then pushing that air back throughout the house.

Instead, we only need a small, flexible line that carries refrigerant in a loop between the air handler and heat pump. We install it through the wall and attach it to the back of the air handler.

This home only needed a single zone. As a quaint, one-story cottage, just one air handler provided enough cooling power for the entire space. And, the air handler has a built-in thermostat, so it measures the temperature in the room where we installed it. 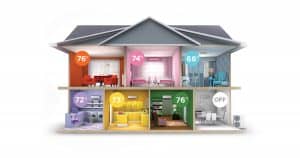 But, if the house was larger, or the homeowner wanted even more customization, he could easily turn this single-zone system into a multi-zone setup and cover more ground.

Each heat pump supports up to eight air handlers. That means you can use one outdoor unit to heat and cool a single-story home like this one, a more common double-story, or even a triple-story house.

And, with a thermostat on each air handler, you’d have close control over each individual zone.

Bonus Heat Along With Air Conditioning

For a long time, ductless heating and cooling was mostly cooling only. It could provide heat in mild weather. But, a mini split wouldn’t keep you warm once the temperature dipped below freezing.

Today, however, you can invest in a Hyper Heat model. Those keep you warm and toasty even when it’s negative 13 degrees outside! 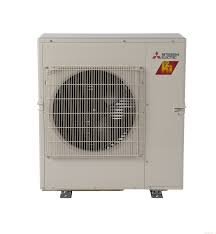 Now, our homeowner was fine with his heater. So, he didn’t consider that upgrade. But he still gets some “bonus” heat.

The same heat pump that transfers heat out of the house can also send it inside. So, in the late fall and early spring, he doesn’t need his conventional heater.

Instead, he gets more energy-efficient heat during those mild months where he only needs a little bit of treatment in the house to keep from getting chilly.

Would you believe that, for all the benefits a mini split offers, the installation took less than a day?

That’s right — in less than 8 hours, this Boise, ID home went from always being hot and sticky in the summer to cool and comfortable no matter how hot it got outside. 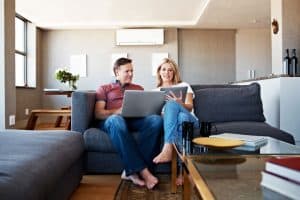 As we mentioned, there’s no ductwork to build or vents to place. Instead, we only had to do a quick load calculator to determine how strong a heat pump he’d need. Then, our homeowner chose a model that fit our specs and his needs.

After that, we found a good spot for the air handler on the wall. It’d be out of the way and would line up with the heat pump outside. That way, we wouldn’t have to run the lines for too long.

We were in and out so quickly that our homeowner, who works at home, barely even realized we were there!

If you’re interested in seeing how a system like this would work in your home anywhere in the Treasure Valley, call or email us here at Snowflake Air for a free consultation!