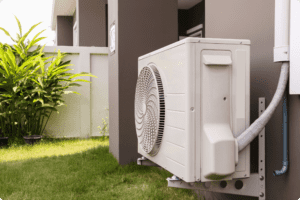 Today’s heat pumps are powerful enough to heat and cool homes in Valley County and the Boise Metro area with no problems. While older models may not have been up to the task, today’s selections will keep you comfortable while reducing your energy bills.

Whether it’s new construction in Kuna, upgrades to a cabin in McCall, or replacing an old furnace in Caldwell, heat pumps are becoming more and more popular in Valley County and the Boise Metro. But, the biggest question we always get is: Do they actually work in our part of the country?

It’s a common question because, years ago, people really only used them for air conditioning. While they had some capacity to provide heat, it often wasn’t enough for the dead of winter.

Or, it would end up costing too much during the cold weather to be worth the investment.

But, times have changed — a lot. So, we’re here to dispel some old myths and provide you with some up-to-date information. If you’re in the market for a new HVAC system, or if you’re just wondering if there’s something better out there, keep reading.

And, if you have any questions about the heating and cooling in your Treasure Valley home, call us at Snowflake Air today! Starting with a free consultation, we’ll help you find the perfect system for your needs.

How Does A Heat Pump Work In Winter?

A heat pump transfers heat (or thermal energy) from one place to another. Even when it’s freezing out, there’s still some heat out there. The heat pump draws in that thermal energy and amplifies it. Then it sends it into your house.

In the summer, the unit works the other way around. In cooling mode, it removes the heat from your house and sends it outside.

Most people think about heat pumps as air conditioners because that’s how most homeowners in the U.S. have used them (they’re much more common in other countries).

That’s in large part because older heat pumps couldn’t heat a home all that well. Once it got really cold, they couldn’t keep up.

So, at best, you’d get a little warmth during the fall and spring. Once winter hit, you were back to the furnace or electric heaters. But that’s no longer the case.

My Heater Won't Turn On

At What Temperature Is A Heat Pump Not Effective? 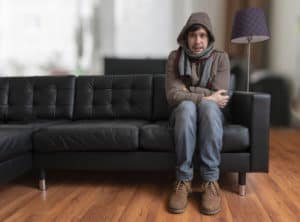 Today’s strongest residential ductless mini split heat pumps can give you 100 percent capacity even when it’s negative 13 degrees Fahrenheit outside. You’ll get less heat, but still some warmth, when it gets colder than that. Most Hyper Heat models still run until it’s close to negative 30 degrees outside.

Once the system can only provide 30 percent capacity or around 7,200 BTUs, the heat pump finally stops working.

And, that’s more than enough for the worst winter weather Boise or even an area as far north as McCall can throw at it.

The average low temperature in our area never dips 10 degrees. And, there have only been ten years over the last three decades when the lowest temperature was in the negatives.

Even at those points, you’re still okay. That’s because, even if the low temp is, say, negative 8 degrees, it only stays that cold for a little while — maybe less than an hour — and that’s in the early morning, around 4 am.

Remember, your heat pump has been keeping your home consistently warm all the time. Even if it doesn’t run at full capacity for one hour, you’re still very comfortable because the house is already heated. You’ll barely notice a difference if you notice anything at all.

Now, some ducted models don’t go that low. But, they also have backup resistive heat strips in case the temperature gets too cold.

And, others that are not rated for winter weather give you 100 percent heat until it’s around 30 or 40 degrees out. They shut off around negative three degrees.

Those are less expensive than the stronger models, and people often use those when they primarily want cooling and maybe a little extra heat sometimes.

But, the ones made for heating are also very energy efficient. That means you’ll pay a little more upfront for a Hyper Heat model. But, you’ll enjoy much lower energy bills for years and years to come.

Read More: How Big Is A Mini Split?

Does Wind Chill Matter With A Heat Pump?

Wind chill doesn’t affect a heat pump’s performance because wind chill isn’t a temperature change. Even though you see a forecast that says it “feels like” a specific temperature, you can disregard that when you’re judging whether a heat pump will work during the winter in your climate.

Wind chill measures how you’ll feel colder because a gust will blow away the layer of warm air close to your skin. Researchers developed it to assess the risk of frostbite, not measure the amount of heat in the air.

So, since your heat pump’s performance depends on the amount of thermal energy in the air, a gust of wind — even a strong one — won’t make a difference.

Read More: What Does A Mini Split Cost?

As a Mitsubishi Diamond Elite Dealer, Snowflake Air is the trusted name for Heat Pump Installations From Boise Metro To McCall, ID. Click below or call (208) 205-9078 for a free consultation. We’ll help you make your home more comfortable — and energy-efficient — than ever before!